Other books: HANDBOOK OF DEPRESSION PDF

Photo-visors and the like reduce it to If in 20m, acts like normal flash gren Distinguished Continues doing damage in Blast Radius for 1d5 Rounds. Distinguished As Plasma Grenade. Radius of 2 meters, holds target in stasis for 1d5 Rounds secret. Eye protection will make you immune.

Radius of 3m. May spend reaction to dodge before rift opens. Anything else is lost to the warp forever. Max capable inflicted is one.

May use wrangling instead of thrown weapons training. Explodes on a 91 or higher. Page DW for details. 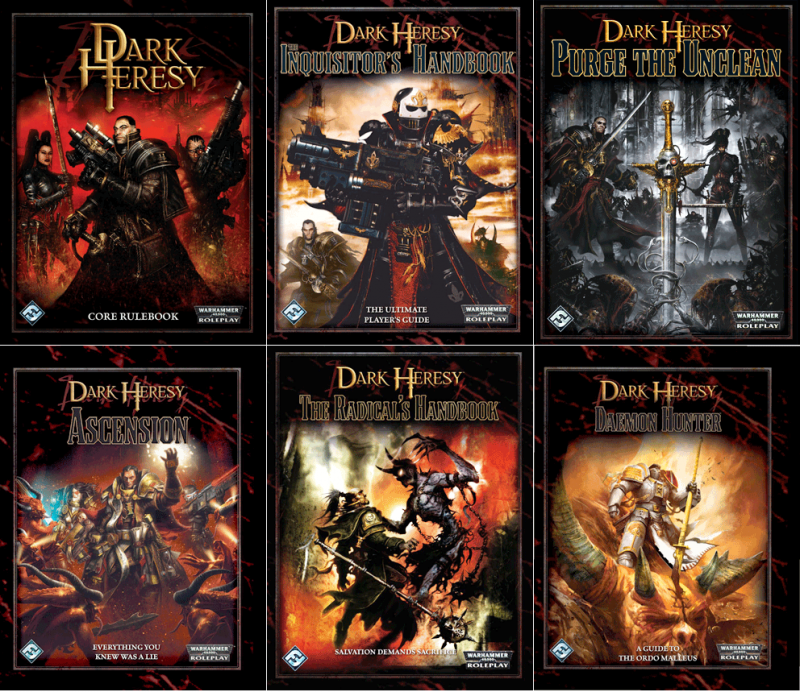 Flaming or Psyching multiple selected targets threw an error When manual input is turned on you no longer need to fill in a dice roll result in the attack panel when you do not attack but e. Fixed an initiative issue, which could result in strange errors during e. Fixed several embarkation vessel issues Fixed issue with changing initiative of tokens being on board of a vessel that is not on the map Fixed true grit again rounding the critical wounds UP instead of down.

Warp will now bypass power armour for the horrifying pleasure of your players per RAW. BS : added check to Warp weapon for force fields; Warp will now be blocked by force fields to the pleasant surprise of your players per RAW. BS : fixed obscure bug that would pop-up a prompt to a defender to select a weapon with a name of 0; this would occur under a specific set of combined elements. When no attack results, the damage macro hitlocations initialized on arms, should be on body Added extra check for dta, in case the lightsource is added without actually having a DTA Zealous Hatred BC was inflicted even when all damage is absorbed should result in 1 wound only.

I think I've finally fixed all the issues concerning a token being on board of a vehicle, when the vehicle is not on the map. The onboard value should be reset when this is the case.

Fixed 'I might be ok' on grenades Feint was broken.

Fixed issue where a 'non targetable token' is selected as second token and no warning shows up. Fixed issue where edited weapons which are set to mounted are NOT added to the mounteWeapons list. Fixed bug in clickable links that roll a result as a result of some powers Fixed special text in hallucogenic Fixed bug in parry. Fixed upgrade armour, not showing when wearing it Fixed upgrade mounted weapon, not showing in statsheet. Fixed psy focus power test to run with a stack of 2 Fixed initialization issue in inputrangedattack.

Some settings were constantly reset. Fixed bug in skills parser where skill groups bonusses were applies to all skills in the group. Updated all menus to be complient with j7 Fixed typo in edit armour Fixed delay init Fixed toggle ship blib RT.

Most messages are now limited to gm and token owner, diminishing unecessary traffic when e. Also some messages that weren't complient to the new form should now be complient.

It is very likely that some bugs crept in during this process, so testing is required. All lib:tokens have been updated this way. Other notable changes: RT: Torps are now 'blibs' on the radar augury required to identify A lot of changes and fixes to the regex parser the token creation tool. Changes Lots of small and big changes in the token regex parser, its now faster, better and less intrusive Healing allows now for dice input e. These replace the following separate properties: PsyClass:0, Navigator:0, Apotheker:0, SuddenDeath:0 Rechecked messages concerning fatigue Added long comment line to first line of ALL macros on lib:DH Few updates on the stat sheet of ships Launched torpedoes are now 'unknown' aka 'blibs' on the radar and will only be revealed after an active augury RT:Active augury now allows a modifier to be entered.

Damage type for force weapons wasn't displayed correctly Fixed 'dodge result not showing' bug. Heal while in cover removed the 'image' states but not the effects of cover, now it removes all. Frenzy state modifiers were applied double in different places Couple of fixes in the ship token stat parser Fixed several bugs concerning torpedoes Fixed the traitsparser Fixed several bugs in the token parser RT: crit hits that do not penetrate armour now result in 1 point of damage and no crit.

RT: macrobatteries salvos only counted the last salvo Fixed issue where all melee attack were rending type. Excel Updated replacestatacronym stuff so the 'cheater' bug does not occur. Also added some quotes around dicerolls so there is an actual roll option.

Updated the shop sheets, fixed a couple of bugs All force weapons non RT are updated to reflect the correct PR for Pen 8. Suppress is half range not full range as it was. To update an existing campaign you need to update the Properties or copy paste the ligth section.

Features You can now select 'thought of the day' instead of the whole splashscreen in the settings. Added a lot of verbosity to see what the warp results are. BS : Overhaul of the Psychic System implementation. This is managed through the campaign Settings. Every token now has a Psychic Class field and a Navigator field.

These are set through Edit Chars. Button on the Macros Management tab. The Psychic Class coupled with the Psychic Mechanics being used, determines how Push, PP modifiers, and other relevant options are handled. There is a Psy Powers button on the Macros Management tab. It initially displays a listing of all powers the character has. Note that Rite of Sanctioning was already implemented. Global modifiers such as fatigue , skill modifiers for focus power tests using skills , and Skill rank for focus power tests using skills were automated.

Enhanced various options that can be selected when attempting to manifest a power aka identifying the number of Sustained Powers and whether the user has the Talented talent in the skill being used… if Psyniscience or Awareness. Navigator Mastery of Navigator powers was added as a new field; this defaults to Novice but can be updated via Edit Power. The modifier for the power is automated during the Use Psychic Power.

Note that some Corruption powers cause additional Phenomena or Perils; those need to be generated by the GM with the Psychic Phenomena tables on the the Campaign panel. Further Corruption powers will not allow fettered usage. For example, if using a power that uses Awareness or Psyniscience, then the power will apply the bonus if the character has Unnatural Perception the base characteristic of those two skills.

Changes BS : further refinement on calling states to minimize unnecessary messaging for new state and in some cases change in state such as cover. Note this will also allow the GM to make tests for NPC's without revealing those tests to the players. Added New tab to the settings for 'system rules'.

This is controlled through System rule settings under Psychic Power settings. Changed Archeotech field into Class fields Repair and upgrade required Further optimizations on both melee and ranged attacks, they're a bit faster now ALL campaign macro code has been moved to lib:DH and a macro call is left instead. This ensures that future updates will be available in the campaign macros as well. Also some campaign macro bugs are fixed that I encountered during this transition.

New tokens dragged to map can now also set the token owner, the default will be the GM.

Rewrote TitleCase function, works better and significantly faster. Fixes Owner ship of the grenade X was set incorrectly v 8. BS : BC use of Lightning Reflexes was rolling twice for everyone regardless if the user had the talent or not as long as the BC Talents rule was checked. Now only rolls if you have the talent. Vehicle embarkation didn't properly convey a message when no tokens were near Fixed embarrassing bug in opposed test BS : Fixed hide throwing formatting error with H.

BS : removed display of a state change with no content in the message. Fixed timeout issue with Manoeuvre for ships Fixed: quickSheet 0,1,2, fullsheet and clearCache so 'repair and update' is not aborted when applied to multiple tokens. BS : various tweaks to skills, talents, and traits. BS : renamed Navigator talent to Navigator Gene talent.

This was generating a conflict with the property setting.

Updated Ship Component and Weapon tables. Which leads to an error everytime you move a token.

Big Changes As usual now you need to run the repair and upgrade campaign panel macro to update old tokens to be used in this new framework.

You can select multiple tokens when doing this. The 'Primitive' and 'Mono' Weapon groups have been renamed to 'Prim'. The corresponding macros and talents have been updated as well.

The reason is that: 1. So we've chosen to do the same however 3. So to keep things clear the 'Primitive' group is now the 'Prim' group. A 'Mono' weapon will thus be 'Prim' group without the primitive quality.

This weapon you can wield in your Primary or Secondary hand. Well actually it already was There are extra rules, which will be implemented in the future, such as extended rules for vehicle combat and 'comrades'.

Please Note, this is based on the Beta rules. The Final rule set may require additional changes. Also a couple of house rules have been added and implemented. BS : Added functionality to upgrade Armour. This introduces a new button on the Manage tab that works the same as Upgrade Weapon but for Armour instead. Will be building into the FW functions that look for Armour Specials that increase the AP based on the type of weapon used to attack the wearer of the armour.

Added thought for the day to the splash screen and a full entries table!!Also some messages that weren't complient to the new form should now be complient.

Which leads to an error everytime you move a token. Chapter Relic of the Space Wolves. Contact Dark Heresy is a roleplaying game based upon the universe of Games Workshop's Warhammer 40, The Lost Dataslate.

Fixed small output bug in test vs characteristic Fixed bug in macro panel for when more then one token is selected Fixed layout bug in message function Fixed issues with number of hits and outcome to chat with lance attacks in ship battle BS : incorporated into the FW that a spray weapon does additional damage to the Horde and not the Flame.

Req cost only for 'excessive' amounts.